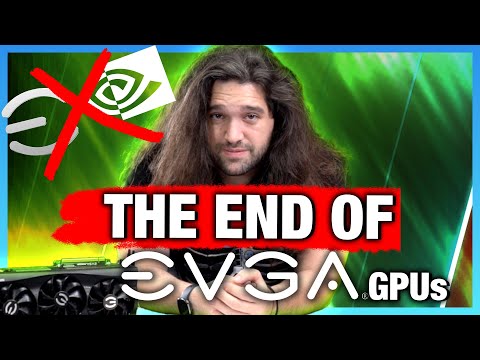 skellyclock 13d
I watched the video. Seems like nvidia's CEO wants to go the apple route and sell everything themselves.

I do wonder about EVGA's decision. Why call gamersnexus in for an interview? It seems to me this is part of a strategy to get intel and AMD tripping over their dicks to get EVGA working on their GPUs - and get one/both of them to agree to conditions nvidia wouldn't.

I think its a smart business move if nvidia has laid their cards on the table so clearly. Reminds me of how valve went all-in on linux development when microsoft threatened their whole business with windows 10.

dcchambers 13d
Wow. EVGA was always the gold standard for Nvidia cards IMO (until Nvidia started producing and selling their own). Unbeatable warranty. Cooler designs that weren't too offensive or jarring. Decent software. What a shame.
jacooper 13d
I think this announcement can be summarized as this(especially after watching GNs video)

- why am I dealing with this crap? Its taking from my time that I could've spent on my family!

- And we aren't making much profit at all!

- Life is about people, and I wouldn't betray anyone, so I will keep paying the people that kept my company running

- AMD and Intel probably do the same crap, I don't want to do it again.

chiph 13d
Seems extreme, but if you aren't making a profit, or enough profit to fund future operations, and there isn't any sign of that changing in the future - then yes you should close that part of the business.

Which is certainly rough on the employees. But the perplexing part of the announcement is that they aren't going to be entering other segments of the PC industry. Perhaps margins on motherboards aren't healthy enough? High-end designer cases could make money but I suspect the volume isn't there.

No idea when crypto took off and supply was constrained, who was taking the profits - but I'd guess nVidia. Now the partners are left holding huge numbers of boards as the prices crash. My guess is to get allocation from nVidia they had to commit to volume and price, but retailers can just return un-sold stock as sale or return (or just demand to pay less, as they drop prices)

I can see why if you survived that, you might just want to step aside from the market - as next time it might take you down. Especially if you're EVGA and prided yourself on premium products/support - and smell a race-to-the-bottom coming.

As majority of what you pay goes on the GPU itself (memory is at least a commodity) - there's probably not a lot of meat left for the partner that's taking the risks.

bawana 13d
The gold mine of crypto mining has dried up. NVIDIA needs to squeeze their partners so they can maintain profits, as does AMD. They want to be like APPLE, the only ones to sell their cards.
Temporary_31337 13d
Some of you may not realise that VGA stands for Video Graphics Adapter so bit silly for EVGA to stop selling video cards and keeping the name as is.
whichdan 13d
I know they don't have plans to work with AMD but I'd consider switching to AMD for my next card if EVGA was manufacturing it. They fixed an old card of mine way out of warranty so I have some brand loyalty here.
bogwog 13d
EVGA is doing what every iOS developer secretly dreams of doing whenever they have to deal with some new stupid bullshit from Apple. Respect.

Also, I've always liked EVGA. I've bought a few of their cards over the years, and many power supplies, and I've never had a bad experience. It seems like they really care about making quality products, which is pretty rare to see nowadays.

If they start expanding into new products with the same focus on quality, that'll be a net gain for the world. Maybe they'll try making laptops again?

Or maybe this is all just an elaborate power move to put pressure on Nvidia and renegotiate their relationship.

homero 13d
Wow EVGA was my favorite company
PascLeRasc 13d
The video says they have around 280 employees. That seems really thin for a company that's so well-known and produced so many products for so long, especially also making PSUs and accessories too. They must be really efficient.
bullen 12d
I downgraded my GPUs to passively cooled 1030 with DDR5 memory.

My bet is all mainstream games will work on those for eternity, because of peak performance and energy cost.