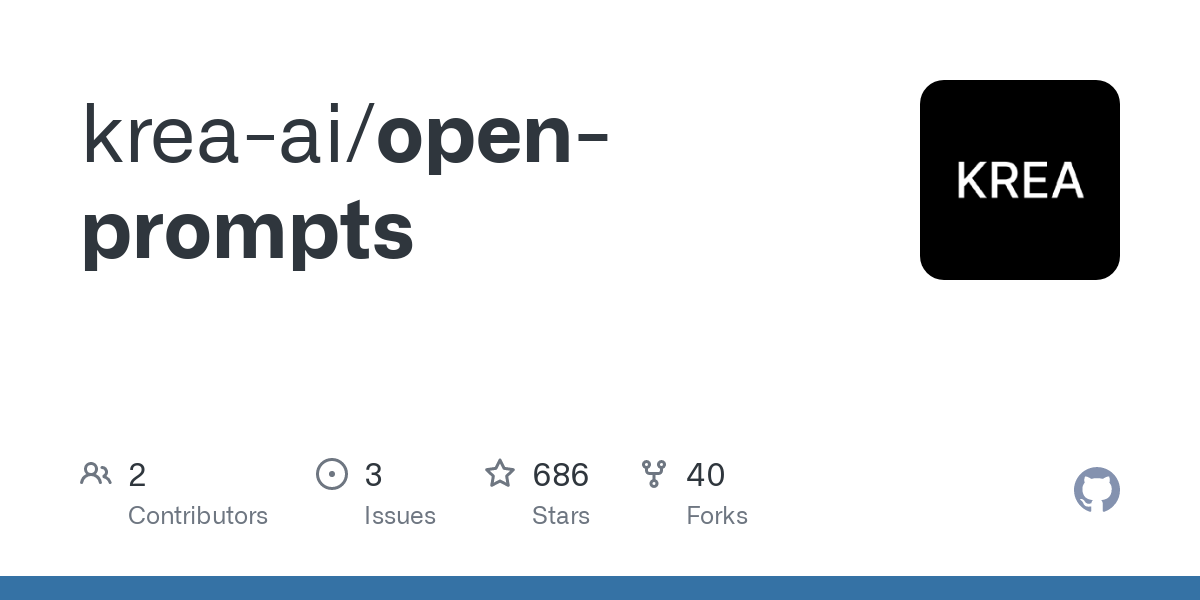 Open Prompts is the dataset used to build krea.ai. The data comes from the Stability AI Discord and includes around 10M images from 2M prompts. You can use it for creating semantic search engines of prompts, training LLMs, fine-tuning image-to-text models like BLIP, or extracting insights from the data—like the most common combinations of modifiers.
vipermu
240
71
6d
GITHUB.COM

Open Prompts is the dataset used to build krea.ai. The data comes from the Stability AI Discord and includes around 10M images from 2M prompts. You can use it for creating semantic search engines of prompts, training LLMs, fine-tuning image-to-text models like BLIP, or extracting insights from the data—like the most common combinations of modifiers.
vipermu
240
71
6d
GITHUB.COM

Oras 6d
This is fantastic. A few days ago I was checking PromptBase [0] and thought it was a really good idea. Yours just took it to the next level being free with massive amount of data.

rhacker 6d
someone should do a thing that lets strangers critique AI by allowing them to select:

and then train the AI to have a fixup pass.

cercatrova 6d
How does it compare with https://lexica.art?
Philomath 6d
That's amazing, thanks for sharing. For how long have you been gathering this data?
Samin100 6d
Great work! If anyone’s planning to use AI generated artwork in their projects, I’ve added an image search API to Lexica, similar to Unsplash. All the images are licensed CC0 and millions more are being added every few weeks.

davidkunz 6d
Hi, just for you to know: The "krea.ai" link in the readme gives a 404: https://github.com/krea-ai/open-prompts/blob/main/krea.ai
whalesalad 6d
This is wild to me. Now we have meta-ai that is surrounding other forms of ai, analyzing the user submitted input as well as the image output, using ai to infer intent, identify nouns etc... and yet all of this is stipulated on the initial datasets that these initial text->img robots were trained on which may or may not be a true representation of our actual culture. So we are lava/magma layering all of these approximations on top of each other and gluing them with scrambled eggs. I think this is all really cool, for the record, it's just something I have been thinking about. For art, I love it, for a self-driving vehicle, lmao.
jononor 6d
Nice. Another meta thing I would like to do, is to generate a bunch of prompts around a topic, mashed up with related or unrelated other topics. So that I can get a bunch of images and just be able to review/curate them all in one go. Does anyone know of tooling in that direction?
nextaccountic 6d
This is fantastic, thanks for publishing it. I'm glad many players in the Stable Diffusion ecosystem is striving for openness (not only of the model itself but there are also open source frontends and related tooling)
jaimex2 6d
There's also https://lexica.art/
masterspy7 6d
I'm curious, I've seen a few sites like this which grab from the Stability Discord. Is there a way to quickly scrape this amount of data from a Discord server?
nextaccountic 6d
Hey, was the specific Stable Diffusion version used to generate each image recorded anywhere in the dataset?

In krea.ai, it doesn't say which version of the model was used to generate each image

It appears that later versions are better in generating faces or something. Like, Stable Diffusion 1.5 vs 1.4 (I'm not sure but there's a great variability nonetheless and I wanted to know if the version of the model accounted for this)

hwers 6d
What’s interesting about datasets like this is that you can likely use it to distil an even more compressed SD generator from it.
dr_dshiv 6d
Radical. I’m imagining randomly sampling images and identifying the text attributes associated with human ratings of image beauty.
password4321 6d
Show HN: I made 7k images with DALL-E 2 to create a reference/inspiration table

mod 6d
Wish the back button could find my spot on the page.

Fun to explore the prompts getting results similar to what I want. Great project.

ipaddr 6d
When it comes to faces or people all photos default to horror.
maaaaattttt 6d
Is there any effort being done in rating prompts in regard to the image the model output and/or what the user chose as being a satisfactory image?

I could (probably naively) imagine that this would be the next step in making these models even more pleasing to humans. Or at least in creating a GPT-based "companion" model that would suggest, from an initial subpar prompt, a prompt yielding better results.

smusamashah 5d
I want back to my ai creations on NightCafe which I did 5 months ago. Almost all of them now looked pretty ugly/stupid now.

It was same as when I saw game play of NFS most wanted it looked so realistic, now it absolutely does not.

This effect is amazing, don't know if it has a name though.