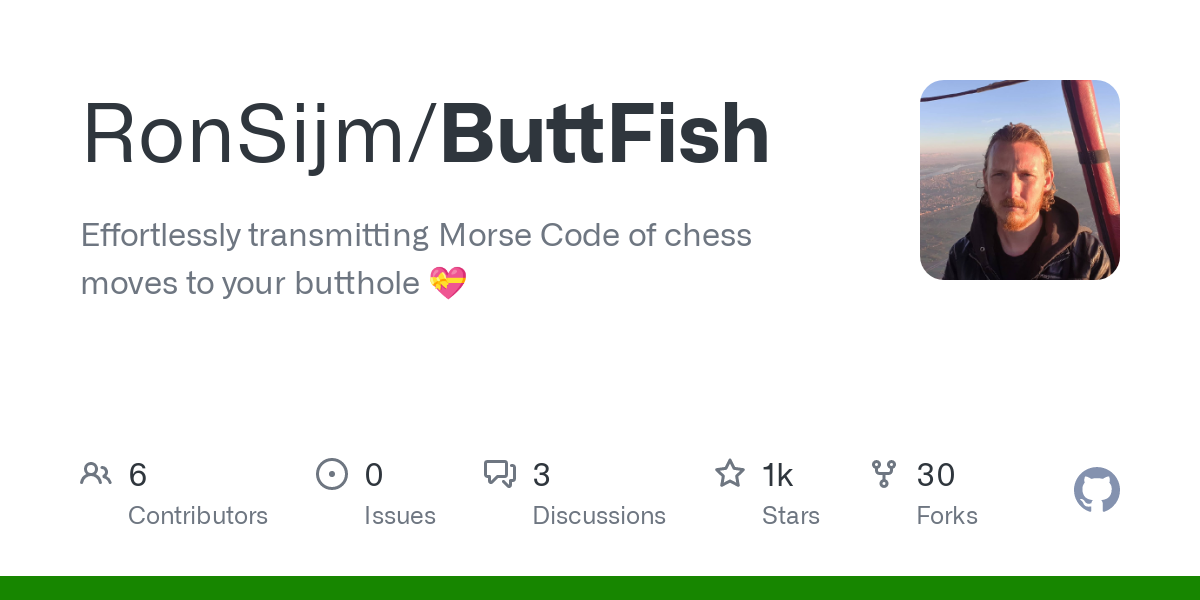 kibwen 61d
To complete the memetic conjunction, HN will surely be abuzz at the fact that the underlying buttplug library is, in fact, written in Rust. For when memory safety really matters: https://github.com/buttplugio/buttplug
devindotcom 61d
The interesting thing I learned about this is that the big names in chess all agree that they don't need to be told what move to make. In a recent interview Magnus Carlsen said:

> The people who get caught are those who cheat in a really obvious and stupid manner. The problem was that he [i.e., a player caught in 2016] was not good enough to see what would’ve made sense.

> Had I started cheating in a clever manner, I am convinced no one would notice. I would’ve just needed to cheat one or two times during the match, and I would not even need to be given moves, just the answer on which move was way better. Or, here there is a possibility of winning, and here you need to be more careful. That is all I would need in order to be almost invincible, which does frighten me.

So all you need is a buzz or maybe two - "caution" and "opportunity," "defense" and "offense" or whatever.

The difficult part is getting the game state to the device. In streamed games this can be done with a medium amount of trouble but in non-streamed OTB games you'd need the player or a confederate to be silently inputting moves for the engine to respond to. Not impossible but... difficult. Nevertheless, when the prizes are in the hundreds of thousands, people may try to find a way.

MikeTheGreat 61d
First, thank you to the poster for posting this - I haven't laughed this hard in a while.

Second - thank you to the person who actually made this. This is incredibly hilarious (just based on the project I'm gonna go ahead an assume they have an account here :) )

Lastly - I know that this is a joke project, but one thing I'm not understanding: how does the system read the current state of the chess board? The, er, Bluetooth/WiFi 'output' of the system is clear enough, but I'm not clear on how the current chess board is input into the system so that Stockfish can actually compute the next move.

(This is a semi-serious question - if you know I'd be curious to find out, but I'm not gonna lose sleep over this and I don't expect anyone else to waste time on it either :) )

kortex 61d
Morse code for the classical chess notation is actually pretty inefficient (12ish bits of data). Often times the actual viable moves are vastly reduced. With your own custom entropy code and custom symbol table, you could massively reduce the transmission time.

- 3 bits for the column of the destination

That's perhaps a bit too much optimization for a troll project. But fun nonetheless.

frob 61d
This is the confluence of like 5 different hacker news communities and I'm loving every second of it.
hoistbypetard 61d
This motherboard article might help if you're not up-to-date on the backstory:

Who knew there would be a thriving community of butt plug hackers lmao.

jesterswilde 61d
The problem I see with this implementation is that it only gives. How will it also receive input? Do I need a watcher who transcribes it?

I would like to see an added device that I can write chess moves into in a similar fashion to how I'm reading. Then I'm a one man cheating machine.

Timpy 61d
I don't think this needs to be a programming problem. If you have a team of coconspirators watching the game live from another location you can manually turn the vibrator on and off remotely. It's not like Sockfish where the player had to relay game state before getting the next move. You don't even need to use Stockfish, you could use any game engine.
laveur 61d
Upvoting for the amazing InfoGraphic this GH repo has.
NotPractical 61d
Reminds me of this other "covert information receiving technique for individuals being closely watched", but in this case used for cheating on an exam: https://news.ycombinator.com/item?id=30675666
TheAceOfHearts 61d
In order to prevent future buttplug related incidents all players will be required to wear a FIDE certified buttplug during over the board matches.
qbrass 61d
Unrelated anecdote.

A couple years ago, a discussion over the cyberdeck trend and how people intentionally make them anti-ergonomic, led me to I run 'sed s/deck/plug/g' on the text of the Sprawl Trilogy as a joke.

HN: Idiots. I hear they use Python for launch systems. Should be Rust for robustness.

(I love this community)

You would basically have a chess computer that you communicated with entirely through your butt.

This would work, even if you played in a Faraday cage since the communication and computation is all internal.