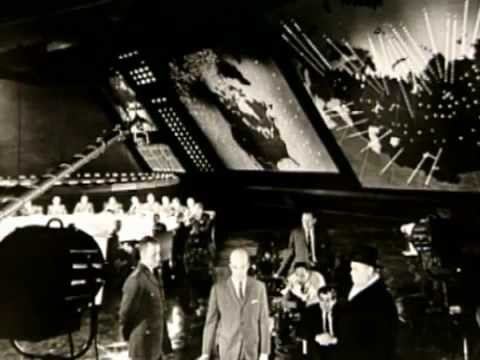 BirAdam 4d
Dr Strangelove is my favorite film. Absolutely hilarious, and also a good satire on the actual views of some at the time.
xamuel 4d
Kubrick films often have "once-you-see-it-you-can't-unsee-it" easter eggs. In Strangelove there's an amazing one: the big circular table in the war room (with the circular lights above it) looks like a mushroom cloud if you squint at it right.

Bonus "can't-unsee-it" in the title itself: Strangelove = Strangle + Glove

sidcool 4d
My all time favorite movie. First time I watched it i was floored. And the technical aspects are also cool. I read somewhere that the details were so spot on that military had investigated Kubrick if stealing defence secrets
js2 4d
Fun fact: Fail Safe was released the same year as Dr. Strangelove by the same studio. Directed by Sidney Lumet, it’s also about nuclear war. It’s a fine movie in its own right. From the Wikipedia:

> Fail Safe so closely resembled Peter George's novel Red Alert, on which Dr. Strangelove was based, that Dr. Strangelove screenwriter/director Stanley Kubrick and George filed a copyright infringement lawsuit. The case was settled out of court. The result of the settlement was that Columbia Pictures, which had financed and was distributing Dr. Strangelove, also bought Fail Safe, which had been an independently financed production. Kubrick insisted that the studio release his movie first.

oblib 4d
I think I saw that the first time when I was about 11 years old, so around 1970. Before that I grew up watching the TV show "Combat" and show like that were all I really knew about our Military.

I was stunned at how they portrayed the insanity and ineptitude of our Military Officers and politicians. They made it look so crazy and believable at the same time. But what was really stunning was someone had the balls to make it.

In that same sort of genre Kelsey Grammer in "The Pentagon Wars" (1998) is pretty good too. I haven't watched either of those for a long time but think about it now and then.

oriettaxx 4d
was he Henry Kissinger?

bmitc 4d
This is probably in the posted video at some point, but George C. Scott was a serious actor who Kubrick talked into starting a scene with a few silly and ridiculous takes to warm up and that the real takes would be the later ones. In typical Kubrick fashion, he used the silly takes in the final edit.

Kubrick is one of the most manipulative directors I have ever read about. He's a genius for sure, but I can't imagine he was much fun to work for as an actor.

MichaelMoser123 4d
I keep wondering about them using the song by Vera Lynn in the final scene: "We'll meet again, don't know where, don't know when".

When and where exactly were they supposed to meet? In a fallout shelter? In the afterlife?

DrNosferatu 4d
One of my favorite films of all time - seen it as a kid of 8 and loved it already. After, the additional meanings started to trickle in as I rewatched it getting older. Peter Sellers is pure genius x3... (he was supposed to have EVEN more characters, but Kubrick finnaly settled on 3) "Precious bodily fluids"... and so many more...

Legend has it that Slim Pickens ("Maj. Kong", the B52 commander) was playing his character straight and not told that the film was a comedy during all of the shoot.

PS: Couldn't help myself enough to the "Ms. International Affairs" pun while in Erasmus.